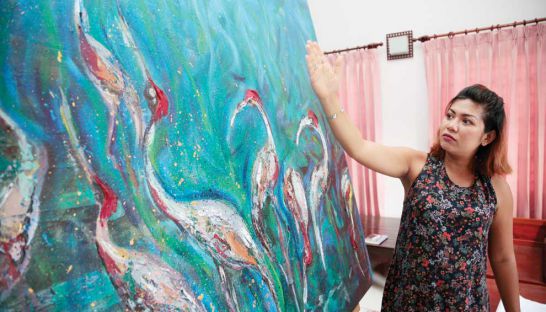 Against thick swathes of oily greens, cranes with scarlet crowns are dipping and diving for their supper, the insects rendered in blots of ink and flecks of gold leaf.

The canvas is one of the most striking works in a new exhibition from Cambodian sculptor and painter Dina Chhan, which is set to open on Thursday.

Dina, who has taken the name of her fiancé and now signs her name Dina Daly, has in the past dedicated her work to representations of women and abstract animals.

But she chose to hone in on the crane and ibis, recurring motifs in her work, for this latest exhibit, titled “On the Verge of Extinction”.

Over cups of milky tea, Dina says she was inspired by a trip she took to flooded forests and the efforts of conservationists to protect the species in Cambodia.

“We had to go there by boat and look through a telescope. All the trees are full of birds – we could no longer see the trees,” she says.

She was also touched by the images of birds etched into the temple walls at Angkor Wat – highlighting a long lineage of Cambodian reverence for the crane. She has now carved out a space for herself in that tradition.

Although it is easy to lament the destruction of forests and several species of animals from Cambodia due to long bouts of unfettered logging, hunting and climate change, Dina says she wanted to celebrate what the Kingdom has managed to hold on to.

“This makes me proud of my country, that we still have these birds left,” she says.

She hopes by immortalising them in art, others will deepen their appreciation for their species and bolster attempts to protect them.

Sarus cranes are a vulnerable breed; there are fewer than 1,000 of the birds estimated across Cambodia, Laos and Vietnam.

In Dina’s work, too, they can be elusive – just visible through long stripes of painted grass – or hidden in a fiery palette with angular lines. Another painting manages to capture both the essence of a galaxy and the texture of cracked earth.

The past few months have been a flurry of creativity for Dina, who is painting as much as possible before the upcoming arrival of her first child.

Dina was also honoured as the Kingdom’s top young artist at the CLMTV (Cambodia, Laos, Myanmar, Thailand and Vietnam) Contemporary Artist Awards held in Thailand in February this year.

Her latest project, she says, has allowed her to spread her wings.

“I feel like painting is freedom. You can show expressions or experiment,” she says.

On the Verge of Extinction opens on Thursday, January 5, 2017 at 6pm at the Insider Gallery, InterContinental Phnom Penh and runs until February 1.